Rembrandt is mentioned as one of the most respected painters in European art history and one of the most important painters in Dutch history, with his paintings and print works. He performed his art in the Golden Age of the Netherlands, a period of economic wealth and cultural vitality. Rembrandt is also known as the “painter of light and shadow”.
Rembrandt was born in 1606 in Leiden, which is now Dutch but then part of the Dutch Republic. His father, Harmen Gerritszoon van Rijn, was wealthy and a miller of the Dutch Reformed Church. His mother was Neeltgen Willemsdochter van Zuytbrouck, the daughter of a Roman Catholic baker.

Rembrandt, who studied primary school from 1612 to 1616, later enrolled in the Latin School in Leiden. It is not known exactly whether Rembrandt, who studied Bible studies and classics in this school for about four years, completed his education in this school. Enrolling at Leiden University in 1620, Rembrandt left the university because of his talent for painting and entered a series of apprenticeships.
He first started working with the history painter Jacob van Swannenburg living in Leiden, and after working with him for three years, he went to Amsterdam and apprenticed for a short time with another history painter, Pieter Lastman. Rembrandt worked for a few short times with Jacob Pynas in Amsterdam before opening his own studio. In 1625, he established a studio in Leiden, the city of his birth, with his friend and colleague Jan Lievens. It started accepting students in 1627. Among his students is Gerrit Dou.

The Beginning of Your Career

It was discovered in 1629 by Constantijn Huygens, the poet and composer of the Dutch Golden Age. Huygens arranged for him orders from the court of The Hague. As a result of this connection, Rembrandt’s most lucrative and regular source of income was the orders given by Prince Frederik Hendrik. These orders continued until 1646.
Rembdrandt, whose father died in 1630, settled in Amsterdam in 1631, where he gained success as a master portrait painter. After his move, he stayed with the art dealer Hendrick van Uylenburg and married Hendrick’s cousin, Saskia van Uylenburgh, in 1634. Here he began to teach painting students. The place he and his wife moved to in 1639 was a promising neighborhood with a growing Jewish population. Today, this house serves as the Rembrandt House Museum in the Jodenbreestraat district.
Rembrandt was earning a considerable amount of money, but due to spending more than he earned, the debt they entered to buy their house caused them financial difficulties. When some of the disasters they experienced were added to these troubles, the life of the couple took a tragic turn. The couple’s first three children (Rombertus, born 1635, Cornelia, born 1638, and also named Cornelia, born in 1640) died in infancy. In 1640, Rembrandt’s mother also died. Later, their son, Titus, born in 1641, became the only child to pass from infancy to adulthood. However, his mother did not live long after his birth and died in 1642 at the age of twenty-nine and was buried in Oude Kerk. In her sickbed, Saskia modeled for many impressive Rembrandt paintings.

Geertje Dircx was hired as a nanny to look after Titus while Saskia was sick. She had an affair with Rembrandt in 1649, which ended badly. Geertje fell in love with Rembrandt and hoped that the famous painter would marry her. When Rembrandt did not make this marriage, Geertje accused him of promising marriage and Rembrandt tried to lock him up in an asylum. Towards the end of the 1640s, Rembrandt took the young Hendrickje Stoffels, who had been his maid, with him and they began a relationship. The couple, who lived as a married couple, had a daughter named Cornelia in 1654.
Rembrandt was declared bankrupt in 1656 as a result of his interest in painting, prints and antiques that exceeded his income. As a result, most of his painting and antique collections had to sell the house and even the printing press. In 1660 they moved into a small house on Rozengracht. His creditors outside the Amsterdam painters’ guild were oppressing him, and even tried to prevent him from making money from painting. However, together with Hendrickje and Titus, he established an art dealership in 1660 and did some work to get rid of the difficult situation.
In 1661, under Rembrandt’s control, they got the job of painting the town hall, and Rembrandt accepted his last apprentice, Aert de Gelder. Hendrickje Stoffels died in 1663 and Titus in 1668. A short time later, on October 4, 1669, Rembrandt died in Amsterdam and was buried in an unknown grave. 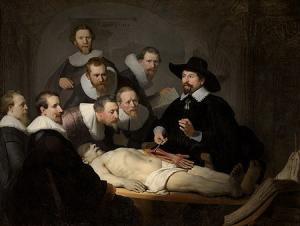 Throughout his life, Rembrandt worked on subjects such as portraits, landscape paintings and narrative paintings. His works, in which he depicted scenes from the Bible in his narrative paintings, received great acclaim. His ability to reflect emotions and pay attention to details in his work was found impressive by the critics.
Rembrandt, who painted in a more flat style when he first started painting, adopted a wavy and rough style in the following years. The same progress can be seen in engraving works. Towards the end of the 1640s he made more experimental work, both in technique and style.
some of his works
The Rise of Lazarus (1630)
Dr. Nicolaes Tulp’s Anatomy Lesson (1632)
The Philosopher in Meditation (1632)
Belshazzar’s Feast (1635)
Danae (1636)
The Night Watch (1640-42)
Susanna and the Elders (1647)
Mill (1650)
Betsheba in her Bath (1654)
Woman Standing at Open Door (1656-57)
Jacob’s Battle with the Angel (1659)
The Denial of St. Peter (1660)
Jewish Bride (1664)