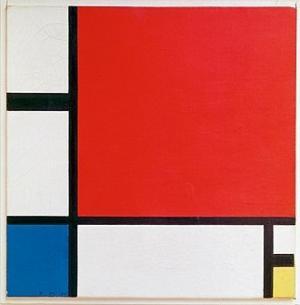 Piet Mondrian grew up in an environment that promoted artistic trends. Painting and music were the areas where he was encouraged in his family. Mondrian took drawing lessons from his father and painting lessons from his uncle. His formal education was not limited to art school, but he also studied philosophy. This education greatly influenced his understanding of art. His philosophical studies led him to develop a new theory of art called Neoplasticism. His neo-plastic paintings, which include a clear and simple form of abstraction, have remained popular to this day. This style consists of transverse and longitudinal black lines and 3 main colors on a white background.
Born in Amersfoot, Netherlands, Mondrian is the second child of his parents. Mondrian’s father, Pieter, was an amateur painter working at The Hague School. His uncle was a successful self-taught painter. The correct spelling of their names are Mondriaans. Between his 1905 paintings (The River Amstel) and his 1907 paintings (Amaryllis), he changed the pronunciation of Mondrian’s signature from Mondriaan to Mondrian. The Mondrians were orthodox Calvinists and were in active opposition to the liberal movement prevalent in the Netherlands at the time. With his father’s encouragement, Mondrian became a teacher and began teaching art in primary and secondary school. In 1892, he decided to quit teaching because of his desire to pursue a career in the arts. With the support of his uncle, he went to Amsterdam to study at the Royal Academy of Visual Arts.
Being very familiar with the art world in Amsterdam, Mondrian joined official art groups to showcase his art. Thanks to his talent for painting, he made a living by doing side jobs such as illustrating books, painting tiles, painting portraits, giving drawing lessons and decorating the roof of the canal house.
Mondrian’s artistic style was influenced by current trends in the Netherlands at the time. He was most influenced by Amsterdam impressionism, which depicted gloomy and realistic landscapes and rural rivers and meadows. Mondrian embraced these artistic styles with some variation by using vibrant orange and pink colours. He also painted landscapes in a single plane and worked in series with various motifs. Examples of these motifs; He used the windmill motif in the early 1900s. He was inspired by Vincent van Gogh in 1905 when his works became popular after being exhibited in Amsterdam. In this process, Mondrian reduced the details as much as possible in his paintings and proceeded under the influence of symbolism. In many of his compositions he focused on the life cycle of plants, giving reflections in the air, trees and water to describe growth, maturation and decay.
With modernist ideas gaining traction among young Dutch artists, Mondrian became acquainted with cubism, which breaks down an object and then abstracts it and reassembles it. He was particularly influenced by the works of Pablo Picasso and Georges Braque. Mondrian’s interest in modernism led him to the avant-garde, and in 1912 he went to Paris, where this movement was most prevalent. He then dropped the second “a” in his last name to show that he was breaking away from his Dutch heritage and turning to French pronunciation. 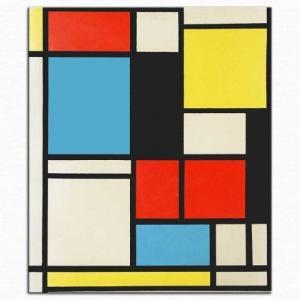 In Paris, Mondrian stepped into the period from 1912 to 1917, when he was influenced by cubism. Deeply influenced by Cubism’s division of an object into geometric segments, Mondrian later pursued a further abstraction. He sought ways to simplify abstract forms with curvature-free shapes and straight lines. His aim here was to completely get rid of associations with natural objects.
In 1914, Mondrian returned to his family in the Netherlands to visit his father, whose health was deteriorating. He was unable to return to Paris at that time, as the First World War had begun, and remained in the Netherlands until 1919. Meanwhile, he improved his art techniques by working with the Dutch painter and architect Theo van Doesburg. They outlined a new art theory they developed together in the journal De Stijl (Style) founded by van Doesburg in 1917. The name of the journal was synonymous with the theory that Mondrian described in various essays.
The De Stijl movement was not just for painters but an idea that could be applied to a variety of arts, from architecture to furniture design, poetry and typography. The principles of this idea were that all paintings rejected representations for the sake of simplified visual elements to the most basic level. The visual elements mentioned were straight horizontal and vertical lines and primary colors along with black, white and gray. Philosophically, the aim was to create an expression of order and harmony. This aim could only be achieved by abstracting the expression in such a way that it would come into existence according to a “universal” art language.
By the time Mondiran returned to Paris, the De Stijl movement had become widespread in the Netherlands, but was not yet effectively known abroad. Mondrian’s aim was to share this art theory with the art world, and for this purpose he published his book Le Neo-plasticisme in 1920. Here, De Stijl referred to the movement as Neo-Plasticism or “new plastic art”. The term “plastic” here refers to the artistic elements that he constructs and the rhythms created by these elements.
Mondrian’s works became well known as he held regular exhibitions in Germany, Paris and the Netherlands. He exhibited his paintings for the first time in the USA in 1926. Thanks to this, he added success to his success, American collectors began to follow his works and ideas. With the English publication of his essays on Neo-Plasticism, American readers had direct access to his theory of art. With the escalation of war with Nazi Germany and his work being banned by the Nazi administration, New York became a haven for him to live out of danger. This city, a home of culture and rhythm, made its artistic gem shine.
Mondrian was never married, but he had a very large circle of friends and acquaintances. He also became rich thanks to his art career. He died of pneumonia in 1944, and around 200 visitors attended his memorial service the next day. To this day, Mondrian’s art has earned a reputation and iconic status in popular culture around the world. His most famous paintings, such as his 1937 “Composition with Yellow, Blue, and Red,” can be seen in major museums such as the Tate Modern, the Philadelphia Museum of Art, and the Met.
Some Important Works
Beach Overview Domburg .